The Liberty Canyon Wildlife Crossing is a  a public-private partnership that has leveraged the expertise and leadership of dozens of organizations and institutions. The core partners include Caltrans, the National Park Service, the Santa Monica Mountains Conservancy, Mountains Recreation and Conservation Authority, Resource Conservation District of the Santa Monica Mountains, and the National Wildlife Federation.

The purpose of the project is to provide a safe and sustainable passage for wildlife across US-101 near Liberty Canyon Road in the City of Agoura Hills that reduces wildlife death and allows for the movement of animals and the exchange of genetic material.

US-101, also known as the Hollywood/Ventura Freeway, is a heavily travelled  commuter route serving the Greater Los Angeles area and connecting Los Angeles and Ventura Counties. It also acts as the primary access route to and from downtown Los Angeles, various residential communities, and tourist destinations in Los Angeles, as well as the central California coast.

The freeway is a formidable and virtually impenetrable barrier for many wildlife species including mountain lions, bobcats, gray foxes, coyotes, and mule deer that inhabit and travel between these two mountain ranges. In particular, mammals with large home ranges such as mountain lions and bobcats need large connected habitats in order to hunt, breed, and thrive.

The construction of US-101 divided this previously continuous habitat range into isolated habitat fragments and resulted in severely restricted movement between the two mountain ranges. For mountain lions in particular, the consequences of this restriction results in increased inbreeding and territorial fighting, and very low genetic diversity, within the Santa Monica Mountains.

The wildlife crossing is critical in the linkage between the Santa Monica Mountains and the Sierra Madre Range, which is one of the few coastal to inland connections remaining in Southern California. Both the South Coast Missing Linkages Project and the California Essential Habitat Connectivity Project identified the need to preserve and enhance this  critical linkage in order to sustain ecological and evolutionary processes in California’s South Coast Ecoregion.

Additionally, the National Park Service has been collecting and publishing data on carnivore movement for over a decade, thereby validating the importance of a linkage for sustaining wildlife populations in the Santa Monica Mountains.

Analysis of genetics and tracking of ranges size conducted has indicated that providing wildlife connectivity through intervening natural areas in the Simi Hills, Santa Susana Mountains, and ultimately to the larger ecosystem of the Sierra Madre Range is imperative for preserving a viable mountain lion population in the Santa Monica Mountains. The genetic diversity of mountain lions in the Santa Monica Mountains was determined to be lower than anywhere else in the state of California, or anywhere else throughout the species range in the Western United States.

Moreover, connectivity is not just important for mountain lions, as National Park Service data has shown that bobcats and coyotes are also exhibiting significant genetic effects in the relatively short period since the freeway was built and research has shown that smaller species including lizards and birds are  affected by the habitat fragmentation caused by roads and urban development.

Without a safe and sustainable wildlife crossing, movement between these remaining areas of natural habitat is severely restricted and wildlife within the Santa Monica Mountains is essentially trapped.

The Liberty Canyon area was identified by scientists and experts working in the field of wildlife movement as the optimal location for a safe and sustainable wildlife crossing across US-101. Prime habitat has already been protected on both sides of the freeway by the Mountains Recreation and Conservation Authority  that is contiguous with large swaths of protected habitat to the north and south of this connection.

For more information and to get involved visit www.savelacougars.org 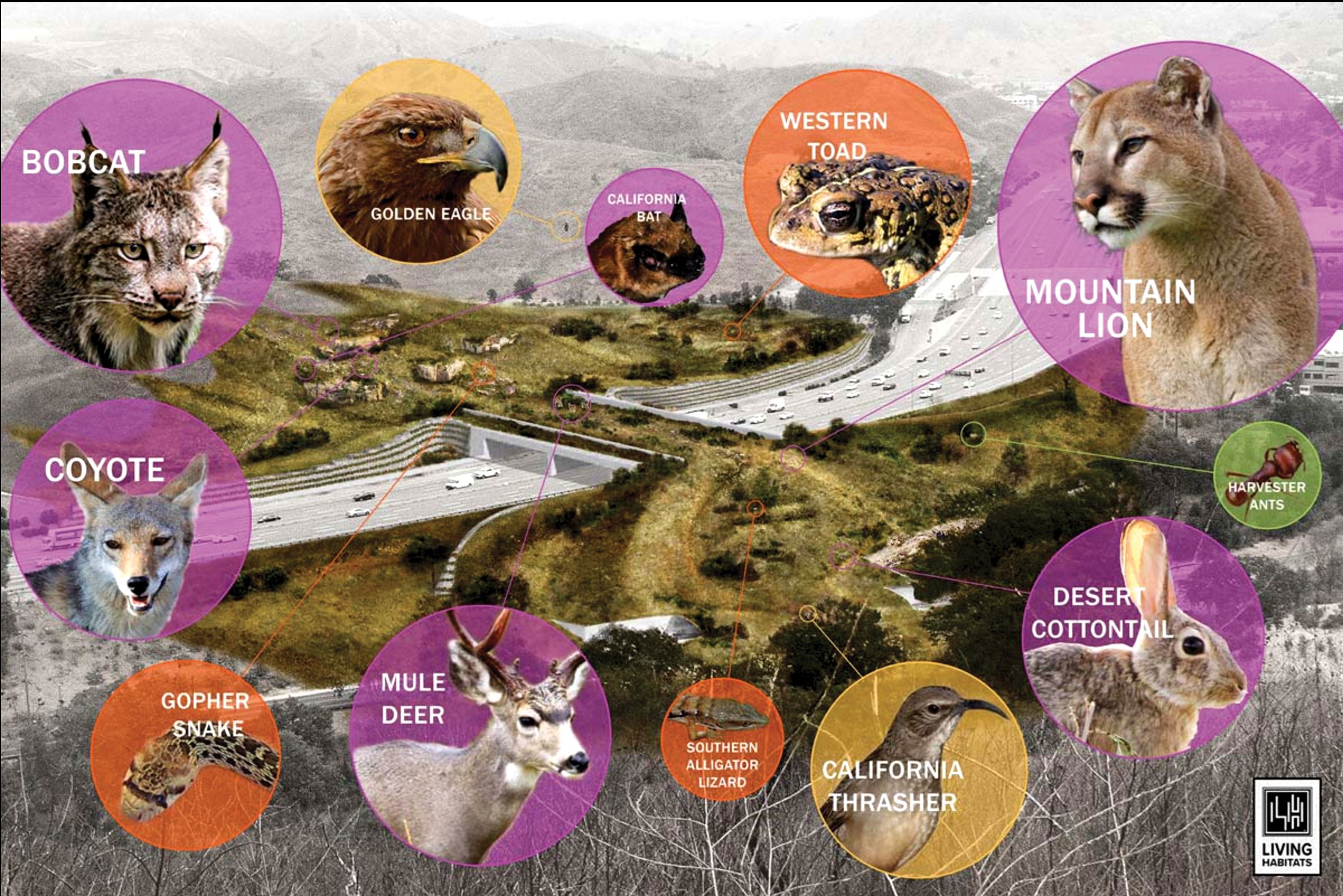